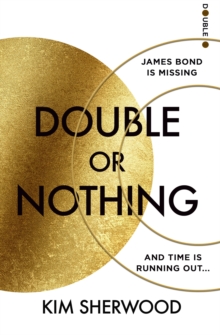 The start of a brand new trilogy following MI6's agents with a licence to kill, that blows the world of James Bond wide open!

James Bond is missing. 007 has been captured, perhaps even killed, by a sinister private military company. His whereabouts are unknown.

Meet the new generation of spies... Johanna Harwood, 003. Joseph Dryden, 004. Sid Bashir, 009. Together, they represent the very best and brightest of MI6. Skilled, determined and with a licence to kill, they will do anything to protect their country.

The fate of the world rests in their hands... Tech billionaire Sir Bertram Paradise claims he can reverse the climate crisis and save the planet. But can he really? The new spies must uncover the truth, because the future of humanity hangs in the balance.

Time is running out.

What everyone is saying about DOUBLE OR NOTHING: 'Filled with characters so real we feel we know them, the novel races through its surprising plot twists like an Aston Martin in high gear' Jeffery Deaver, author of Carte Blanche, a James Bond novel 'Stylish, explosive, fresh and fun, Kim Sherwood takes one of the world's most beloved series and makes it her own' Chris Whitaker, author of We Begin at the End 'Kim Sherwood has taken the world of James Bond and turned it on its head' Charles Cumming, author of BOX 88 'A cleverly plotted and absorbing novel with a fantastic cast of fully rounded characters' Lisa Ballantyne, author of The Innocent One 'Delivers everything you could want and more from a high-octane, high-stakes spy thriller' Tim Glister, author of Red Corona