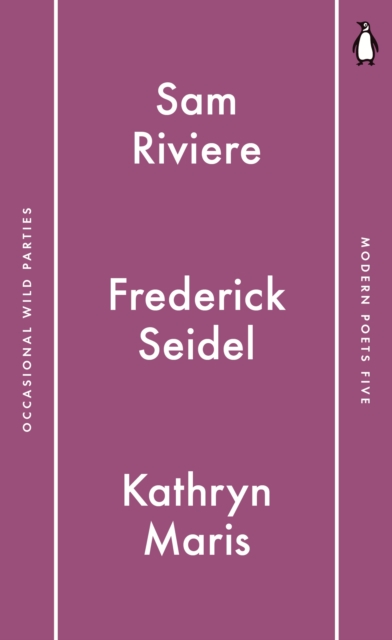 Occasional Wild Parties brings together Sam Riviere, one of the most discussed of the new generation of British poets, whose 'post-internet' poetry sees him acting now as scribe, now as DJ, taking in everything from technologized romance to celebrity culture as filtered through Kim Kardashian's make-up routine; the 'elegant ghoul' Frederick Seidel, zooming through the dark underbelly of international high society on his Ducati racing bike; and the wonderfully observant Kathryn Maris, whose work ranges with a dark wit over incomprehensible deities, wayward mothers, the politics of children's sports contests, and psychoanalysis. All three lift the lid on their corners of civilized society to show the less glittering realities that lie just beneath the surface.

"On the verge of perpetrating acts of artistic barbarism"I perceived a spoon as the title of a plate of food"- SAM RIVIERE, 'Mindfulness'"Deer garter-belt across our visionAnd stand there waiting for our decision.

"Our only decision was how to cook the venison. I am civilized butI see the silenceAnd write the words for the thought balloon."- FREDERICK SEIDEL, 'Kill Poem'"The man in the basement wrote stories about heroin. The woman in the attic read stories with heroines.

The woman in the attic noticed a bruise that ran from the top to the base of her thigh. The bruise looked like Europe. The man in the basement was in love with the sister of the secretive man who loved him more.

He whooped to the woman, 'You killed your student?'To himself he wept, 'I killed my father.'"- KATHRYN MARIS, 'The House with Only an Attic and a Basement'