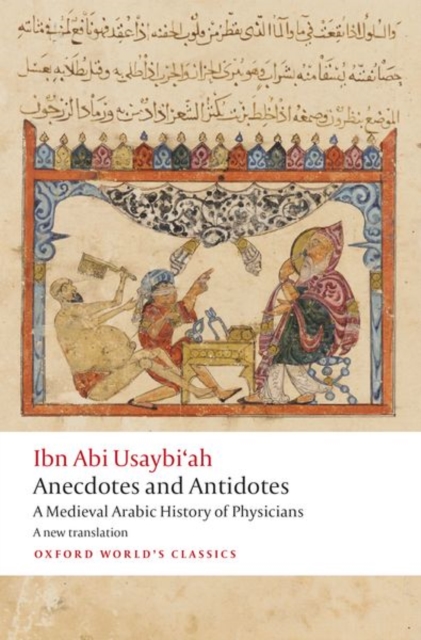 Anecdotes and Antidotes : A Medieval Arabic History of Physicians

To my knowledge...no one...has ever written a comprehensive book dealing with physicians through the ages and recounting their history in a coherent fashion.

So wrote Syrian physician Ibn Abi Usaybi'ah, circa 1243, as he embarked on the first world history of medicine ever attempted. Many physicians served at the royal courts of their time and were firmly part of the intellectual and cultural scene, where the ability to write stylishly and entertain one's peers in both prose and verse was the basis of social credibility.

The work Ibn Abi Usaybi'ah created contains over 432 biographical accounts of physicians from those of ancient Greece, such as Galen, through Avicenna and Maimonides, to the author's own colleagues of the 13th century. As such, his work includes important accounts of medical activity in medieval hospitals. Through this book, a window opens not only on to the origins of the medical profession, but also into the truly multi-cultural, multi-religious world of the medieval Middle East. Anecdotes and Antidotes is an abridged version of this world history of medicine. It comprises 103 biographies of physicians and philosophers, organized geographically and chronologically, from the 4th century BC to the 13th century, and includes seminal Muslim, Christian and Jewish figures. It contains vital medical and historical information, as well as revealing the cultural values, interests and concerns of the literary and intellectual elite of the time.