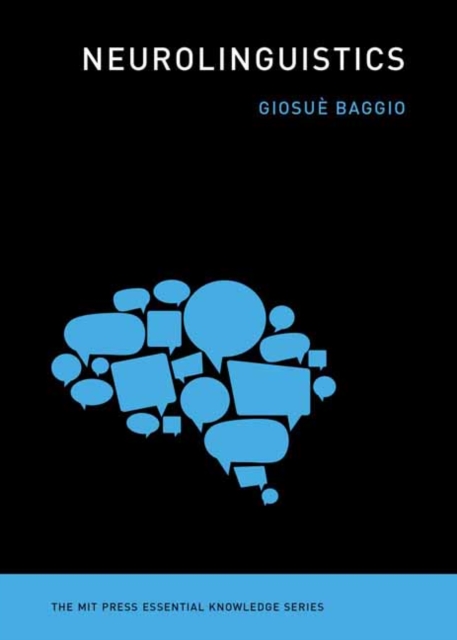 An accessible introduction to the study of language in the brain, covering language processing, language acquisition, literacy, and language disorders.

Neurolinguistics, the study of language in the brain, describes the anatomical structures (networks of neurons in the brain) and physiological processes (ways for these networks to be active) that allow humans to learn and use one or more languages. It draws on neuroscience, linguistics--particularly theoretical linguistics--and other disciplines. In this volume in the MIT Press Essential Knowledge series, Giosuè Baggio offers an accessible introduction to the fundamentals of neurolinguistics, covering language processing, language acquisition, literacy, and speech and language disorders.

Baggio first surveys the evolution of the field, describing discoveries by Paul Broca, Carl Wernicke, Noam Chomsky, and others. He discusses mapping language in "brain time" and "brain space" and the constraints of neurolinguistic models. Considering language acquisition, he explains that a child is never a "blank slate" infants and young children are only able to acquire specific aspects of language in specific stages of cognitive development. He addresses the neural consequences of bilingualism; literacy, discussing how forms of visual language in the brain differ from forms of auditory language; aphasia and the need to understand language disorders in behavioral, functional, and neuroanatomical terms; neurogenetics of language; and the neuroethology of language, tracing the origins of the neural and behavioral building blocks of human linguistic communication to the evolution of avian, mammalian, and primate brains.