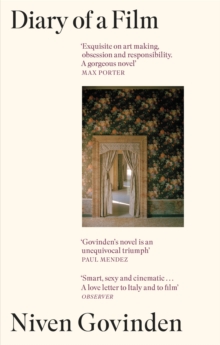 Diary of a Film

'Niven Govinden's Diary of a Film, his sixth novel, is also his best yet. Smart, sexy and cinematic (in many senses), it is a love letter to Italy and to film' Observer

'Immersive . . . This is a wise and skilfully controlled novel that can be read in an afternoon, but which radiates in the mind for much longer' Financial Times

An auteur, together with his lead actors, is at a prestigious European festival to premiere his latest film.Alone one morning at a backstreet cafe, he strikes up a conversation with a local woman who takes him on a walk to uncover the city's secrets, historic and personal. As the walk unwinds, a story of love and tragedy emerges, and he begins to see the chance meeting as fate.

He is entranced, wholly clear in his mind: her story must surely form the basis for his next film.This is a novel about cinema, flaneurs, and queer love - it is about the sometimes troubled, sometimes ecstatic creative process, and the toll it takes on its makers. But it is also a novel about stories, and the ongoing question of who has the right to tell them.