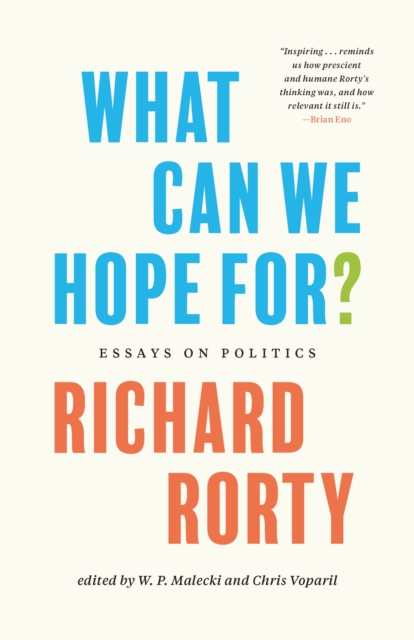 What Can We Hope For? : Essays on Politics

Richard Rorty, one of the most influential intellectuals of recent decades, is perhaps best known today as the philosopher who, almost two decades before the 2016 U.S. presidential election, warned of the rise of a Trumpian strongman in America. What Can We Hope For? gathers nineteen of Rorty’s essays on American and global politics, including four previously unpublished and many lesser-known and hard-to-find pieces. In these provocative and compelling essays, Rorty confronts the critical challenges democracies face at home and abroad, including populism, growing economic inequality, and overpopulation and environmental devastation. In response, he offers optimistic and realistic ideas about how to address these crises. He outlines strategies for fostering social hope and building an inclusive global community of trust, and urges us to put our faith in trade unions, universities, bottom-up social campaigns, and bold political visions that thwart ideological pieties. Driven by Rorty’s sense of emergency about our collective future, What Can We Hope For? is filled with striking diagnoses of today’s political crises and creative proposals for solving them.