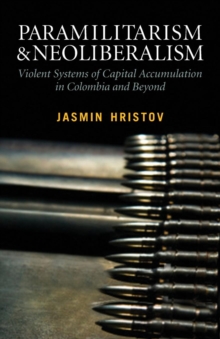 The people of Colombia have, for the last fifty years, been subject to a specific form of violence: paramilitarism. An embodiment of the dark underbelly of global capitalist accumulation, this form of pervasive violence expresses the exacerbation of social inequalities and class formation under capitalism. In Paramilitarism and Neoliberalism, Jasmin Hristov theorises this extreme expression in light of forced displacement, labour repression, subjugation of social movements, decentralisation of violence, drug trafficking and the emergence of a variety of para-institutional armed actors across Latin America. The activities of paramilitary groups in the postdemobilisation era, their involvement in human rights violations, and their multilevel support networks inside major state institutions are documented, with a particular emphasis on violent dispossession and illegal land appropriation that has benefited agroindustries and mining enterprises. Hristov engages in a Marxist political economy approach, combined with a global sociological perspective, allowing for an expansive and deep-reaching understanding of paramilitarism as a phenomenon with many faces, ultimately illustrating how it is increasingly becoming the coercive counterpart of global capital.