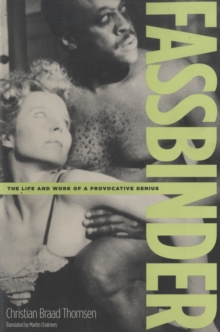 Fassbinder : The Life And Work Of A Provocative Genius

Christian Braad Thomsen More by this author...£18.99Out of stock
Share:

Rainer Werner Fassbinder was the most innovative practitioner of New German Cinema. He worked at breakneck speed and in fourteen years made forty-four films, including Ali: Fear Eats the Soul (1973) and The Marriage of Maria Braun (1978). Fassbinder ruthlessly attacked both German bourgeois society and the larger limitations of humanity, and his films detail the desperate yearning for love and freedom and the many ways in which society defeats that desire. In Fassbinder, Christian Thomsen, a close friend of the director, illuminates Fassbinder's body of work while revealing his insider views of a man who, despite a furious temper, manic working habits, and rampant drug addiction, supported an extended family- including his mother, a string of male lovers, lovelorn women, and even a pair of frustrated wives-with his intoxicating and prolific imagination. This book, like Fassbinder's often-used image of the mirror, brilliantly reflects the sexual, political, and overwhelmingly human contradictions inherent in the life of this intensely creative man and the remarkable films he directed. Christian Braad Thomsen is a Danish filmmaker and scholar.