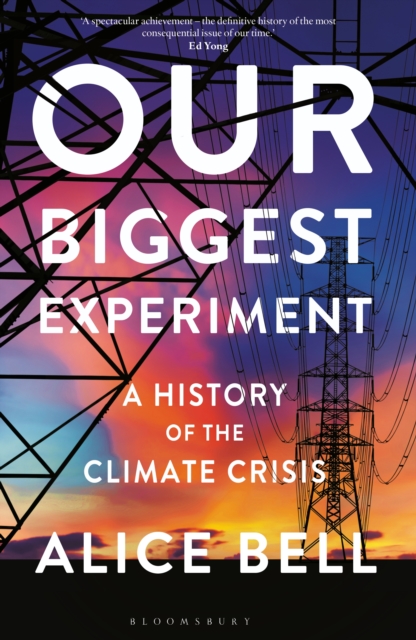 Our Biggest Experiment : A History of the Climate Crisis

Maybe it's the weirdness of the weather. Maybe it's another way to pour scorn on politicians. Maybe the steady stream of headlines about fires, floods and droughts is finally starting to get to us. Whatever it is, for more and more of us, climate change is shifting from an itchy fear at the back of our heads to something we feel we need to get a grip on.Climate change is a horror story, but as Our Biggest Experiment shows, the tale of how we discovered it isn't.

Our exploration of the Earth's fluctuating environment is an extraordinary story of human perception and scientific endeavour. It also began much earlier than you might think. The likes of Greenpeace and Al Gore are merely the latter chapters of a story that goes back to the days of Napoleon. This book takes us right back to climate change science's first few steps in the 18th and 19th centuries, through the point when concerns started to arise in the 1950s, right up to today, where the 'debate' is now over, and the world is finally starting to face up to the reality that things are going to get a lot hitter, a lot drier (in some places) and a lot wetter (in others), with catastrophic consequences for most of Earth's biomes. The discovery of climate change was not a 'Eureka!' moment - it was a slow and gradual realisation as each new generation pieced together a little more information.

Our Biggest Experiment tells the story of how the world became addicted to fossil fuels, how we discovered that electricity may be our saviour and how renewable energy is far from a 20th century discovery. Dr Alice Bell cuts through the jargon and the jumble of numbers to present a pacey and approachable telling of how we are getting to grips with what is now the defining issue of our time. She doesn't sugar-coat the situation - the potential consequences for us and for future generations are genuinely disturbing - but she also makes the very salient point that it is amazing that we noticed it in the first place. The message she gives is ultimately hopeful: harnessing the ingenuity and intelligence that has driven the history of climate change research can mean a more sustainable and bearable future for humanity.