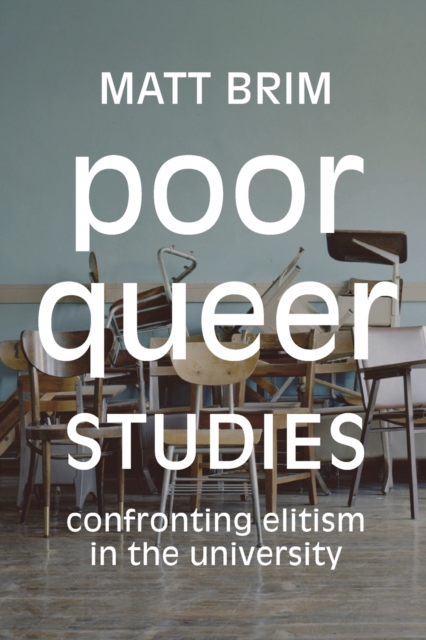 "POOR QUEER STUDIES contextualizes the material conditions under which Queer Theory is produced in the academy. Locating elite universities as the primary loci of Queer Theory, and as producers of and investors in racialized class stratification, Matt Brim interrogates what role Queer Theory has in shoring up class and racial disparities. How, Brim asks, is Queer Theory-a field theoretically dedicated to disrupting structures of power and inequality-implicated in the classed structures of the academy? Brim contends that, in its current formation, Queer Theory-or what he dubs "Rich Queer Theory"-is propelled by universities who refuse to serve poor students and only hire faculty who have graduated from the "prestige pipeline." Moreover, Brim argues that class as an analytic has effectively dropped out of Queer Theory scholarship. To counter these trends, Brim argues for a "Poor Queer Studies" that attends to class differences within the queer academy by examining the material reality through which "subversive" and "antinormative" Rich Queer Theory is produced. For Brim, the "Poor" in Poor Queer Studies allows for two connotations: the lack of material resources at under-resourced and non-elite universities, and the theoretical "holes" around class and racialized class positions in Rich Queer Studies. In chapter 1 Brim offers a case study of his own institution-The College of Staten Island, CUNY-by way of contextualizing the need for a Poor Queer Studies. In chapter 2 Brim expands his introductory argument that the exclusion of low-income students and working-class faculty from Queer Theory is a field-defining feature. In chapter 3 Brim offers a "vocational Queer Studies" that forces academics to consider how Queer Studies prepares students for labor outside of the academy. Chapter 4 is an examination of how students who are mothers have shaped Brim's understanding of Poor Queer Studies. In chapter 5 Brim centers John Keene's 2015 book, Counternarratives, to arrive at a conversation about learning how to read Black queer literature. In the conclusion, Brim proposes a notion of "queer ferrying" by which resources are shared between rich and poor institutions. This book will be of interest to students and scholars of queer studies, black queer studies, American studies, higher education studies, and labor studies"--