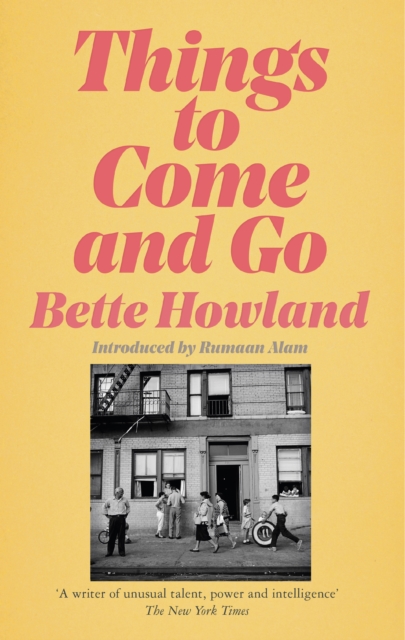 Things to Come and Go

Things to Come and Go showcases the incomparable talent of Bette Howland in three novellas of stunning power, beauty, and sustaining humour. 'Birds of a Feather' is a daughter's story of her extended, first-generation family, the 'big, brassy yak-yakking Abarbanels'. Esti, a merciless, astute observer, recalls growing up amid (the confusions and difficulties of) their history, quarrels, judgements, and noisy love, and the sense of estrangement and inescapable bonds of blood.

The clamour of the city, both its threat and its possibility, are just outside the door in 'The Old Wheeze', as a single mother in her twenties returns to her sunless apartment after a date at the ballet. Shifting between four viewpoints - the young woman, the older professor who took her out, her son, and her son's babysitter - the story masterfully captures the impossibility of liberating ourselves from the self. In 'The Life You Gave Me', a woman at the midpoint of life is called to her father's sickbed.

A lament for all that is forever unsaid and unsayable, the story is 'an anguished meditation on growing up, growing old and being left behind, a complaint against time.' (The New York Times)

First published in 1984, Things to Come and Go, Bette Howland's final book, is a collection of haunting urgency about arrivals and departures, and the private, insoluble dramas in the lives of three women. This edition features an introduction by Rumaan Alam, bestselling author of Leave the World Behind.