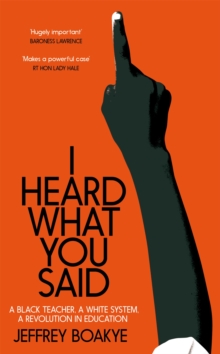 I Heard What you Said

Before Jeffrey Boakye was a black teacher, he was a black student. Which means he has spent a lifetime navigating places of learning that are white by default.

Since training to teach, he has often been the only black teacher at school. At times seen as a role model, at others a source of curiosity, Boakye's is a journey of exploration - from the outside looking in. In the groundbreaking I Heard What You Said, he recounts how it feels to be on the margins of the British education system.

As a black, male teacher - an English teacher who has had to teach problematic texts - his very existence is a provocation to the status quo, giving him a unique perspective on the UK's classrooms. Through a series of eye-opening encounters based on the often challenging and sometimes outrageous things people have said to him or about him, Boakye reflects on what he has found out about the habits, presumptions, silences and distortions that black students and teachers experience, and which underpin British educatio