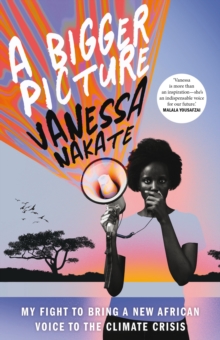 A Bigger Picture : My Fight to Bring a New African Voice to the Climate Crisis

We are on the front line but we are not on the front page. When it comes to speaking or writing about climate change, voices and stories of people of colour and from the Global South are often omitted, even though these communities often contribute the least to the problem and suffer its consequences the most. Vanessa shows that without addressing this important gap, without highlighting the real and immediate danger communities like hers and so many others face, we have no hope of making progress in the race to save our planet.

Vanessa is an exceptional young person who has seen the effects of climate change play out first hand. As a shy girl growing up in Kampala, she began to notice that the huge climate problems the African continent was facing were being completely ignored on the global stage; problems like the destruction of the Congo rainforest, sharply rising temperatures and subsequent droughts which leave the agricultural sector incredibly vulnerable. Witnessing this suffering caused by global warming propelled Vanessa into action and despite risks to her personal safety she became the first climate striker in Uganda at just twenty-one years old.

In A Bigger Picture she traces the links between the climate crisis and anti-racism, feminism, education, economics and even extremist radicalization. In telling the inspiring personal story of how she found her voice, Vanessa shows readers that no matter your age, location or skin colour, you can be an effective activist.