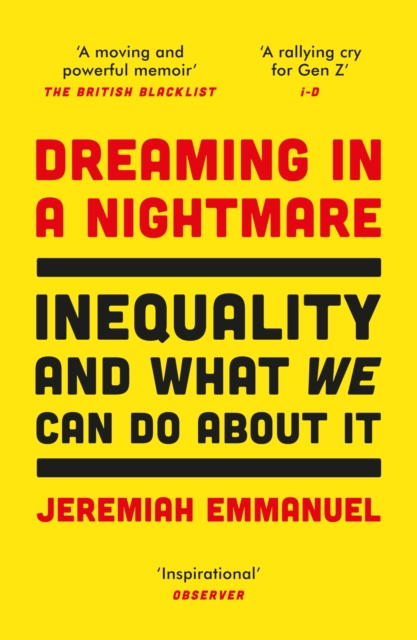 Dreaming in a Nightmare : Inequality and What We Can Do About It

A moving and powerful account of the problems faced by a new generation, from crime to poverty to an increasingly divided society, from an extraordinarily accomplished young activist and entrepreneur. My name is Jeremiah Emmanuel. I'm twenty years old. I'm an activist, an entrepreneur, a former deputy young mayor of Lambeth and member of the UK Youth Parliament. I wanted to change the world, but the world I was born into changed me first. Raised in south London, I lived in an area where crime and poverty were everywhere and opportunities to escape were rare. Violence was accepted, prison was expected. Your best friend might vanish overnight, never to be seen again. That was the world I knew; the only one I thought was possible for people like me. But somehow, as I got older, I found my way to a different world: a place where people listened to you, where opinions were heard, where doors were opened, where there were opportunities around every corner. Everything had stayed the same and everything had changed. This is the story of how I did it, the people who helped me get there, and the huge hurdles I - and my entire generation - have to learn to face and overcome. It's the story of how to move forward in a world that's holding you back.