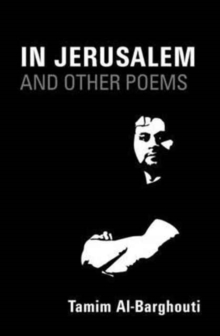 Born in 1977, Tamim Al-Barghouti is probably one of the most widely read Palestinian poets of his generation. His poetry readings are attended by thousands, sometimes packing stadiums and amphitheaters. The reception of his poetry among a diverse audience from various backgrounds and age groups is a testimony to the vitality of the centuries-old tradition of classical Arabic poetry. The poems in this collection were written in Cairo, Ramallah, Amman, Washington, DC and Berlin between 1996 and 2016. In 2007, Al-Barghoutis long poem In Jerusalem, which describes an aborted journey to the city, became something of a street poem. Palestinian newspapers dubbed Al-Barghouti The Poet of Jerusalem. To this day, his posters hang on the streets of Jerusalem and other Palestinian cities, where key chains are sold with his picture on them. Sections of the poem have even become ring-tones blaring out from cell phones across the Arab world, and children compete in memorizing and reciting it. In Jerusalem and other poems by Al-Barghouti have also had millions views on various TV Channels as well as on the internet, winning the poet an exceptional celebrity status in the Arab World.On the January 26, 2011, one day after the Egyptian Revolution that toppled President Hosni Mubarak, Al-Barghouti wrote the lyrical poem Hanet; its Arabic title roughly translates as It's Close. With the internet down, he faxed the poem to a Cairo newspaper, copies of which were distributed in Tahrir Square. Soon after, Al-Jazeera TV Channel broadcast a recording of it and a video of his reading was projected in the Square every couple of hours on makeshift screens.