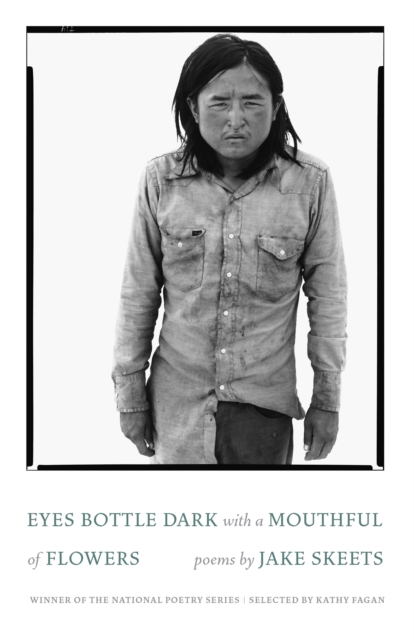 Eyes Bottle Dark with a Mouthful of Flowers : Poems

"A major debut that feels timely and timeless." --KATHY FAGAN

Eyes Bottle Dark with a Mouthful of Flowers is a debut collection of poems by a dazzling geologist of queer eros. Drunktown, New Mexico, is a place where men "only touch when they fuck in a backseat." Its landscape is scarred by violence: done to it, done on it, done for it. Under the cover of deepest night, sleeping men are run over by trucks. Navajo bodies are deserted in fields. Resources are extracted. Lines are crossed. Men communicate through beatings, and football, and sex. In this place, "the closest men become is when they are covered in blood / or nothing at all." But if Jake Skeets's collection is an unflinching portrait of the actual west, it is also a fierce reclamation of a living place-full of beauty as well as brutality, whose shadows are equally capable of protecting encounters between boys learning to become, and to love, men. Its landscapes are ravaged, but they are also startlingly lush with cacti, yarrow, larkspur, sagebrush. And even their scars are made newly tender when mapped onto the lover's body: A spine becomes a railroad. "Veins burst oil, elk black." And "becoming a man / means knowing how to become charcoal." Rooted in Navajo history and thought, these poems show what has been brewing in an often forgotten part of the American literary landscape, an important language, beautiful and bone dense. Sculptural, ambitious, and defiantly vulnerable, the poems of Eyes Bottle Dark with a Mouthful of Flowers are coal that remains coal, despite the forces that conspire for diamond, for electricity.