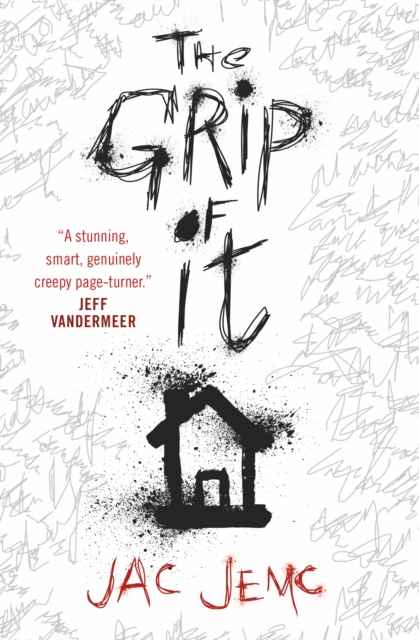 The Grip of It

A chilling literary horror novel about a young couple haunted by their newly purchased home Jac Jemc's The Grip of It tells the eerie story of a young couple haunted by their new home. Julie and James settle into a house in a small town outside the city where they met. The move -- prompted by James's penchant for gambling, his inability to keep his impulses in check -- is quick and seamless; both Julie and James are happy to leave behind their usual haunts and start afresh. But this house, which sits between lake and forest, has plans for the unsuspecting couple.

As Julie and James try to settle into their home and their relationship, the house and its surrounding terrain become the locus of increasingly strange happenings. The architecture -- claustrophobic, riddled with hidden rooms within rooms -- becomes unrecognisable, decaying before their eyes. Stains are animated on the wall -- contracting, expanding -- and map themselves onto Julie's body in the form of bruises; mould spores taint the water that James pours from the sink. Together the couple embark on a panicked search for the source of their mutual torment, a journey that mires them in the history of their peculiar neighbours and the mysterious residents who lived in the house before Julie and James. Written in creepy, potent prose, The Grip of It is an enthralling, psychologically intense novel that deals in questions of home: how we make it and how it in turn makes us, inhabiting the bodies and the relationships we cherish.

'A psychological spook story in the best high literary tradition...The real scare in this truly haunting novel stems from the way Jemc keeps the psychological tension of Julie and James' relationship taut...Shivery and smart. A book that brings the legacy of Henry James into the modern world with great effect.' ― Kirkus (starred review)

'For connoisseurs of the 'new weird' and literary/psychological horror à la Mark Z. Danielewski's House of Leaves and Marisha Pessl's Night Film.' ― Library Journal (starred review) 'Told in a luxuriously looping style that examines experiences from two points of view, this seemingly typical haunted house tale takes some very unexpected turns. Jemc has created a frightening world that feels both impossible and altogether too real. Prepare to read this in one sitting and think about it for days to come.' ― Booklist

'A page-turning psychological thriller...[The Grip of It] is the clever work of a writer who has patiently carved out her own home in contemporary fiction...as chilling as it is evocative.' ― Laura Pearson, Chicago Tribune