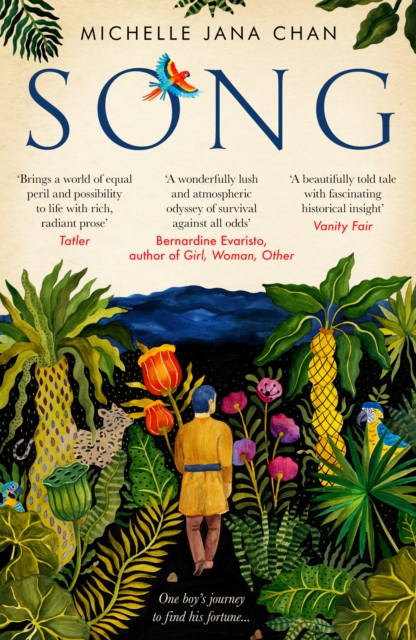 Song offers a rare and compelling fictional exploration of the pioneering Chinese presence in British Guyana, in the 18th century. A totally convincing coming-of-age novel, which chronicles the growth not only of a young boy who left China with no idea of the world he was heading into, but also a powerful testimony to frontier life in Guyana's gold-mining interior.'Jacob Ross, winner of the Jhalak Prize 2017'

A dazzling novel, brimming with psychological acuity. Chan conjures the sweet smells of Guiana, the shadow of an oil lamp and a filigree of leaves leaning over a river in swirling mist.

An unforgettable portrait of a man and a little-known land.'Sara Wheeler, authorSong is just a boy when he sets out from Lishui village in China. Brimming with courage and ambition, he leaves behind his impoverished broken family, hoping he'll make his fortune and return home. Chasing tales of sugarcane, rubber and gold, Song embarks upon a perilous voyage across the oceans to the British colony of Guiana, but once there he discovers riches are not so easy to come by and he is forced into labouring as an indentured plantation worker.

This is only the beginning of Song's remarkable life, but as he finds himself between places and between peoples, and increasingly aware that the circumstances of birth carry more weight than accomplishments or good deeds, Song fears he may live as an outsider forever. This beautifully written and evocative story spans nearly half a century and half the globe, and though it is set in another century, Song's story of emigration and the quest for an opportunity to improve his life is timeless.