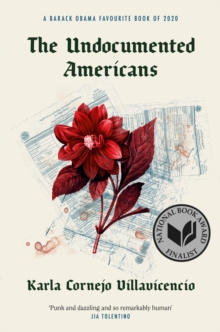 'Punk and dazzling and so remarkably human ... like watching firecrackers go off’ - Jia Tolentino

One of the first undocumented immigrants to graduate from Harvard reveals the hidden lives of her fellow undocumented Americans.

Karla Cornejo Villavicencio was brought by her Ecuadorian parents to New York City at the age of four and became one of the many millions of undocumented people living in the United States. She is also one of the first undocumented immigrants to graduate from Harvard. She found the election of Trump in 2016 terrifying and was scared for all immigrants – the election triggered a personal reckoning and the realisation that she had been avoiding the story she wanted to tell. So she wrote her immigration lawyer’s phone number on her hand and set off around the United States to tell the stories of her fellow undocumented immigrants and to find the hidden key to her own.

Sick of the media’s portrayal of undocumented Americans as nameless labourers, she was determined to portray themin all their humanity – loving, resilient, funny but also flawed, difficult, traumatised. Their stories are myriad. From those who work for wealthy Staten Islanders to the people drafted in to deal with the aftermath of 9-11; from the many and varied undocumented communities of Florida to the ghostly horror of those living in Flint, MI.

Villavicencio meets families in Cleveland who live with the indescribable pain of separation, pain she finds reflected in her own story, the ongoing aftershocks of which are threaded throughout the book.

THE UNDOCUMENTED AMERICANS is a deeply personal, unconventional work of reportage. Forceful, relentless, tender and often hilarious, Villavicencio’s uncompromising, charismatic prose is unforgettable, giving voice to the undocumented Americans like her.