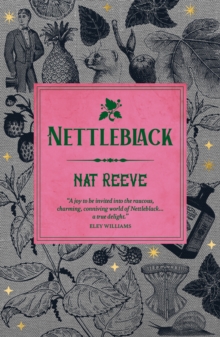 "To be blunt: I must escape." 1893. Henry Nettleblack has to act fast or she'll be married off by her elder sister. But leaving the safety of her wealthy life isn't as simple as she thought.

Ambushed, robbed, and then saved by a mysterious organisation - part detective agency, part neighbourhood watch - a desperate Henry disguises herself and enlists. Sent out to investigate a string of crimes, she soon realises that she is living in a small rural town with surprisingly big problems. When the net starts to close around Henry, and sinister forces threaten to expose her as the missing Nettleblack sister, the new people in her life seem to offer her a way out, and a way forward.

Is the world she's lost in also a place she can find herself? Told through journal entries and letters, Nettleblack is a subversive and playful ride through the perils and joys of finding your place in the world, challenging myths about queerness - particularly transness - as a modern phenomenon, while exploring the practicalities of articulating queer perspectives when you're struggling for words.