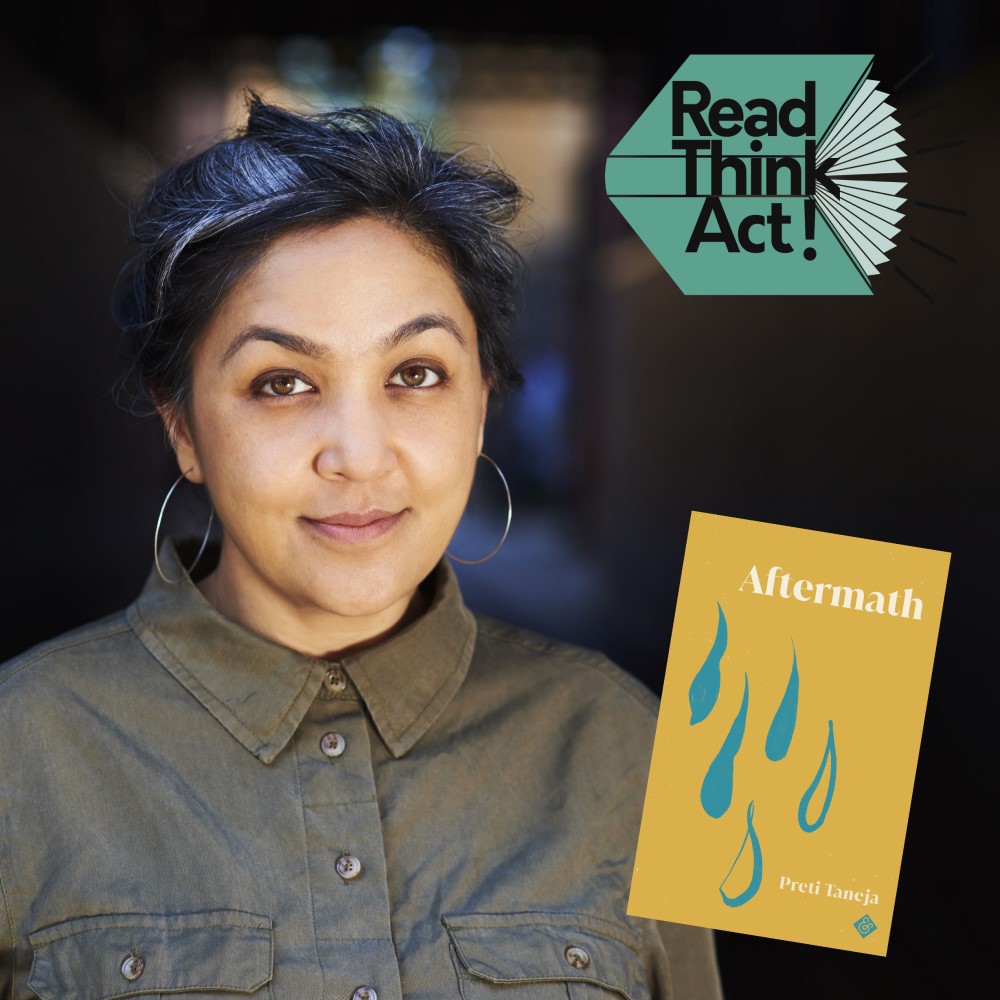 Instead of a Read Think Act video, this week we're delighted to offer a wee conversation with Preti Taneja, author of the novel We That Are Young, and the brand new Aftermath , a furiously generous and tender exploration of the language around terror, incarceration, writing, collective and personal grief, based on the author's experence around teaching creative writing in prison.

Our Jess asked Preti some questions about the meaning of dignity and the connections between activism and writing in her work.

Jess: Thank you for the experience that was reading Aftermath. The number of dog-ears in my copy is a sign of how much this book asked me to stop, to address my reactions, and how I sit inside the violence it talks about. You mention at one point how 'the flip side of shame is dignity' and this, I think, is something I felt in Aftermath - a dignity of approach.

To what extent do you think that dignity is something that we can/do give to other people? What does dignity in activism entail for you?

Preti: I love this question. Dignity is something we all feel within us, as innate as a life force. And yet it needs nurturing, protecting, and endorsement, not only for ourselves, but also for each other. Allowing it to grow into something beyond ourselves is a collective responsibility, a mutual, relational one. All of us can give dignity to each other and it shouldn’t happen at the expense of anyone being denied it. In simple ways and in structural ones, we can do this. The structural ones – standing up when we know that in the UK Black and brown and minoritized communities are disproportionately targeted and harmed by systemic violence across our society – in education, in culture and the media, in policy and legislation and all the nuanced manifestations of that – for example the increasing use of surveillance technology, or police powers to stop and search.

It means whatever your status in life, you are making the connections between poverty, school exclusions and prisons, and asking why the government wants to invest in ever greater capacity to incarcerate people while the cost of living is going up, pushing so many even deeper into poverty. That’s a vote of no confidence in all our children’s futures. Having the dignity to be conscious of our own place in a constructed hierarchy of race, and refusing to live like that or off the back of that – is how I think we can as activists ‘do’ dignity with and for others.

Your use of the 'atro-city' when talking about structural violence is something else I find myself being grateful for, because it wouldn't let my brain fall into the vagueness it's so easy to revert to. It's established violence, in bricks and bodies - as it always is. How did thinking of it in terms of architecture help (or not) you situate yourself in the narrative?

These questions are so brilliant. Breaking down language, pressing it for its multiplicity of meanings, being alive to aural and visual and multilingual puns is part of the political practice of my writing. Breaking up the word ‘atrocity’ which is so often used to singularise an event, as if it has no context, is the opposite of what the word suggests to me – the atro-city – whose etymology lies in the idea of the cruel city: which contains all of us, which holds both prison and university, award-winning literature that nevertheless fails to encompass or sometimes even adds to harm in our world; alongside too many silenced voices. The architecture of a place is so important to how our experience of dignity is formed. Inside ourselves and around us. So breaking down that word allowed me to conceive of a narrator’s role, carrying the event and its trauma through an imagined place which has been reduced to rubble through the implosion of its own myths of truthfulness, integrity, trustworthiness. It’s the atro-city which gives rise to atrocity; we live in it and with it.

Writing that happens within the carceral system also destabilizes certain myths about writing, it gets in the way of easy ideas of 'literary activism'. The word 'sentence' is taken down from its pedestal, for example. I wanted to ask you, partly because I often find the way literature is idolised (therefore let off the hook) infuriating, how you view the relationship between writing and activism in your life at the moment. Are there ways in which they are at odds with each other?

Writing is such a solitary act, and reading such an intimate one. A book like this was an act of reckoning and recalibration for me. I hope it reaches readers who, like me, struggle every day with the ways state violence impinges on our lives in overt and hidden ways; and also what it makes people do; committing violence which shatters so many people’s lives - and so the cycle goes on. What can literature really do in such a world?

A lot, I think, at the level of form. It might change minds, shore up resistance, it might make people brave enough to act. Writing can feel at odds to activism because we don’t think it can do anything – that’s just not true. It can provide a sense of solidarity – and sometimes that can be its own form of activism. But I also think that happens outside commercial literary culture. In the spaces people never think it can happen in; yes, I mean prison. Although I consider writing a form of activism, it’s not all I can do as an activist. Teaching is that; so is mentoring; keeping in touch with former students, collaborating, making networks of peers and across disciplines, standing up next to people when they need it for struggles we are all implicated in.

Going back to a kind of demystifying of harm - you also write about violence not being mysterious in itself, but that we mystify it. It reminded me of the way climate collapse is talked about, using terms such as 'hyper-object', too big to grasp, even though really, its mechanisms are exceedingly clear. Is this a defence mechanism? And at the same time, what kind of harmful narratives does the acceptance of such a defence mechanism bring with it?

Perhaps it’s a defence mechanism for people of a certain class and/or race. Perhaps it’s a fear of having to confront what concepts some people take for granted for themselves, such as freedom, safety and dignity are really based on – the unfreedom, lack of safety and indignity the systems we live within perpetrate on millions of people of colour. To really see it would mean wrestling with one’s own collusion and culpability, which is a lot to ask: most people are just trying to get through the day, love their families, live as well as possible in the current climate and economic crisis. To pull that defence away would undermine cherished beliefs of ‘civilisation’, for example that elected officials hold themselves to the moral standard they legislate for the rest of us, that the police keep us safe, that the criminal justice system is, in fact, fair; that racism in the UK’s institutions, from government to elite universities to schools to the media, health service, police and prisons, isn’t structural or doesn’t exist except in one or two individuals. But to believe that is so dangerous and blind. It shores up narratives of pro-colonialism, or the denial of slavery and colonisation’s links to UK immigration policy, and the ongoing impact on generations then born here.

The stories we tell ourselves, that there’s nothing we can really do, which the state tells us are right, the narrative silence around power, histories and above all profit, which ignore and deny origins, do the most harm. And going back to the question of dignity, those silences deny people the ability to see Black and brown lives as fully human, rather than simply there to service the racial hierarchy of culture and capitalism. I won’t call it tragic because it’s not inevitable. That wilful denial must be reversable, dissolvable. And that’s where I think writing meets activism: that’s what, to me, it’s for.

You can order Aftermath below - believe us, it will stay with you!

For more radical, caring and wise discussions and depictions of grief, here's our list of Inclusive Books on Grief and Loss

title
We That Are Young
author
Preti Taneja