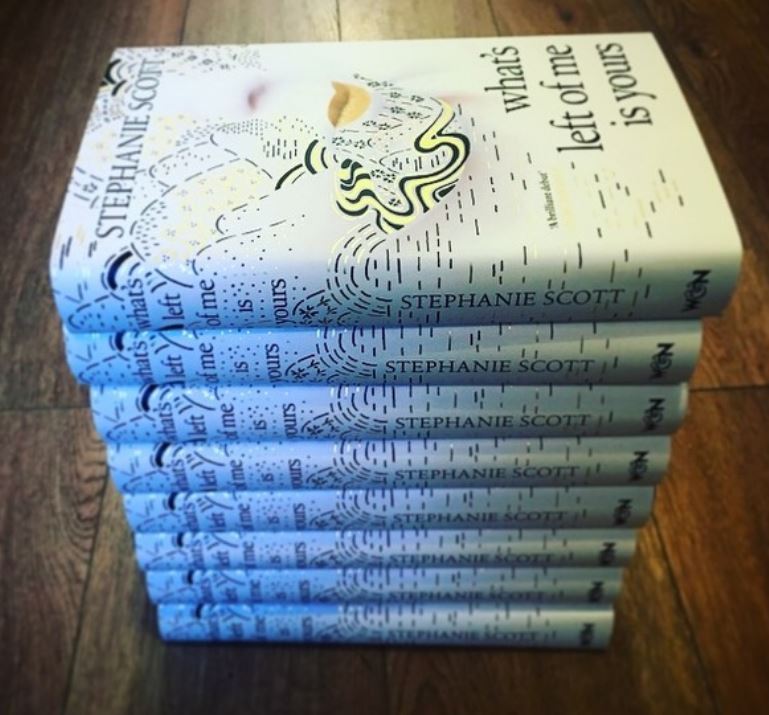 Stephanie Scott’s luminous debut, What’s Left of Me Is Yours, is an evocative thriller set within the Japanese marriage break-up industry. Now out in paperback, the novel explores love, betrayal, and the far-reaching consequences of hiding the truth. Read on for Noor's interview of Stephanie, and below you can re-watch the launch chaired by fellow novelist Jing-Jing Lee HERE!

What inspired you to write What’s Left of Me is Yours?

I read an article by Richard Lloyd Parry, the Asia Editor of The Times, about a murder in Tokyo which involved the marriage breakup industry - an industry in which you can hire someone to seduce your spouse and provide you with grounds for divorce. In that case, a marriage breakup agent had strangled his lover when she discovered his true profession and threatened to leave him. The agent was swiftly arrested by police, but in his confession he repeatedly said “I loved her. I love her still.” He claimed to have been trapped by all the lies he told his target over the course of their relationship, but stated that he had truly come to love her, that he could not live without her. I wondered if what he had said was true – could you possibly love someone and kill them?  Love, in its ideal form, is selfless, but I started to consider if there are perhaps as many types of love as there are people. How we love and what we are capable of doing to each other for love is where the novel began.

Did you have any stylistic or literary influences in mind when you started to write the novel?

I read across genres and this is at the heart of What’s Left Of Me Is Yours – it is a literary thriller, but I wanted to write a novel which combined a murder case, a love story, and a tale of mothers and daughters.

Through Rina, a young photographer who has given up everything for her marriage, and Sumiko, a newly trained lawyer raised by her grandfather, I explore the bonds of motherhood and also womanhood across generations, particularly the pressure to conform to social norms, and the tensions that can arise between societal expectation and personal desire.

In Sumiko’s search for the truth about her mother’s murder, I look at female voices that have been silenced, and the notion of reclaiming, even re-writing personal history. Victims of murder are the most brutally silenced of all and too often people can become inured to the news coverage, classifying such stories as something strange that happens to someone else, somewhere else. Yet, for Sumiko, the newspaper article in the novel is all people would know of her and her mother. In looking at the past and writing her story she is reclaiming their identities and their lives.

Regarding my favourite writers, I love the novels of Sayaka Murata, Mieko Kawakami, Yoko Ogawa, Maggie O’Farrell, Donna Tartt, Han Kang and Helen Dunmore, but for this book I am also indebted to the Brontës, Tolstoy, and ancient Greek drama, particularly Euripides’ Electra.

What was it like researching What’s Left Of Me Is Yours?

This novel has been ten years in the making. Although it is a work of fiction, I wanted to be true to the cultural complexity of Japan, so in some ways I never stopped researching. I worked extensively with lawyers in Tokyo to understand how the law and specifically the criminal justice system has evolved into what it is today. I also worked with prosecutors at the Japanese Embassy in London and have been made a member of the British Japanese Law Association as a result of my research. The details I discovered from ‘forgotten parties’ to the badges defence attorneys wear (tiny golden sunflowers surrounding a set of judicial scales) were a delight to find and often crucial to shaping the narratives within the novel.

During this period, I was also awarded a British Association of Japanese Studies Toshiba Studentship for my anthropological work on Japan - this is a prize for postgraduate research not normally given to novelists - but it did facilitate further fieldwork and travel, enabling me to study the evolution of culture across generations, the locations in the novel, and to spend time with the people who live there. I will forever be grateful for these opportunities.

What do you want readers to take away after reading the book?

This novel is an exploration of love and, by extension, humanity; a tribute to the many problems and complexities in our relationships that are universal. I hope it encourages readers to look more closely at the world around them and to treasure the people in their lives.

Are you working on anything else right now?

My Indian grandparents were both fluent in Japanese due to the occupation of Malaya and Singapore during the Second World War and my grandmother’s story is particularly fascinating to me. As a teenager, she was forced to flee her home and hide in the rubber plantations to escape the invading army. She later met a Japanese solider and taught him English - theirs was a very unusual friendship. After the war, following a marriage and children, she went back to school to gain her qualifications and became the first female partner of the largest international law firm in Singapore. She worked with Japanese clients for the rest of her life and it is her journey, from terrified girl on the run to formidable and inspirational woman, that I would like to explore in my next novel.

title
The Secret History : From the Pulitzer Prize-winning author of The Goldfinch
author
Tartt, Donna

title
What's Left of Me Is Yours
author
Stephanie Scott