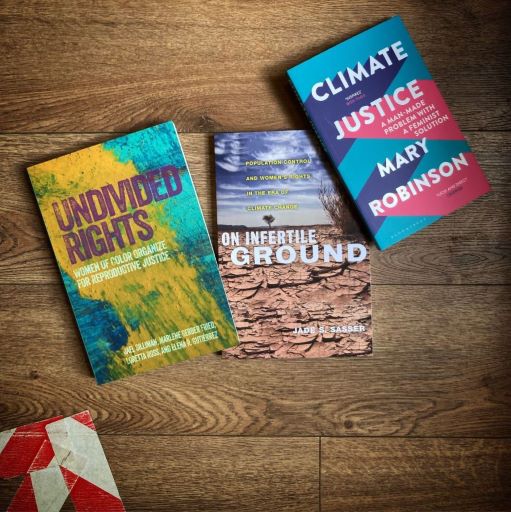 A while ago, Mairi gathered a list of books which explore, celebrate, and do honest justice to child-free lives in all their complicated variety. As so many themes surrounding women’s bodies, choices about parenthood are so often lumped into camps and opposites: childless or child-free, a statement or a loss. In reality, decisions and feelings around the subject are never clear-cut, even within one individual life. Our personal choices can also easily be weaponised.

A few years ago, alongside other climate justice activists, I went public with my fears about bringing children into a world of increasing climate collapse and societal upheaval. To make a long story short, our worry about criminal government inaction and global inequality was turned into something rather different, both by members of the media and public commentators. I can’t remember how many times the reaction to my fear was: ‘so you’re not having children to save the environment? Because of overpopulation, right?’

It says a lot, however, that this is still the conclusion so many jump to; it is indicative of both how women’s bodies are viewed, and of a widely spread misunderstanding of what caused the climate crisis and continues to make it worse.

Some brilliant people have written about how the climate crisis is rooted in inequality (a few examples are included in the list below). The majority of the world’s population was never behind this fundamental change in our atmosphere. Here’s a particularly staggering figure I sometimes share: the world’s richest 10% are responsible for half of the world’s lifestyle carbon emissions. Add to that the historical responsibility of the countries where industrialisation began. To say that there are ‘too many of us’ is a huge simplification.

It’s also a dangerous one, and this is where the myth about population not only gets in the way of meaningful action, but can also become a threat to people’s lives and bodies. Population control and coercion has a history of outright racism behind it, and we don’t even have to look to historical policies. A culture of judgement – one in which one choice (to have or not to have children) is seen as the wrong one for society, and one in which not giving birth is viewed as a solution to a problem of power and extraction (not that we live, but how we live) – is enough to create that distraction, and that threat to the most vulnerable.

The term ‘reproductive justice’ was coined by women of colour in the 1990s, aligning reproductive health and social justice. It’s a line of thinking worth paying close attention to, so as to avoid pit-falls, such as that oh-so-tired, line: ‘so you’re not having children to save the environment?’

Below you’ll find links to a few organisations and researchers working at the intersection of race, class, gender and reproductive politics, as well as a list of books which are great starting points for learning and expanding minds. As you’ll see, many of these are US based, as the idea of reproductive justice there has a longer history. This doesn’t mean we don’t desperately need these insights here, in the UK, or Scotland, and in our own lives.

And lastly, the books, an ever-growing list, including the phenomenal 'Climate Change is Racist' by Jeremy Williams who's put together useful questions for a discussion HERE.