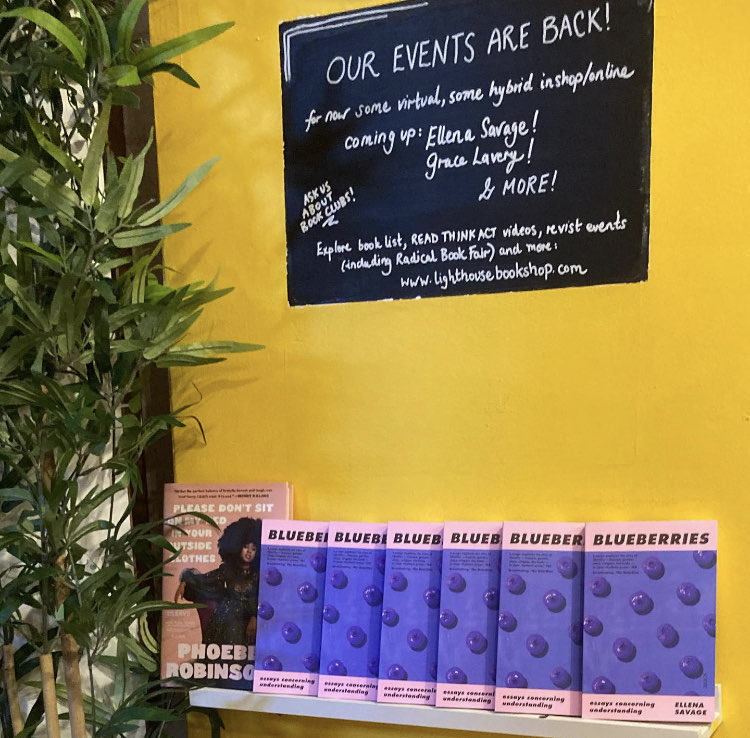 On Wednesday February 23rd we're exceedingly excited to host a virtual event with Ellena Savage, author of the personal essay collection Blueberries. Here, Christina shares some thoughts about why this is a book like absolutely no other.

Blueberries is a collection of essays, and it is fearless.

Ellena Savage trusts her readers to understand her work, and understand as she herself attempts to understand. Savage has intense attention to detail and has honed her craft to be able to speak to a reader directly – there’s a reason my copy is so dog-eared, and I felt so personally addressed by her words.

Blueberries is wholly itself, but porous rather than closed: it lets the world in, often referring to other artists, other writers, and conversations. It feels like a disservice to compare Blueberries to any other work, because it is in many ways unique, and contains an experimental multitude of forms and I don’t want to spoil the reading experience by describing them here. However, if I had to compare it to other books, which I’m about to, I would say that the deep engagement with other writers’ work, and thinking about writing and gender, and thinking about understanding, reminds me of Maggie Nelson’s The Argonauts. The other work it reminded me of, due to its precise turn of phrase, ability to speak directly to a reader, and its quick wit, is Hera Lindsay Bird’s collection Hera Lindsay Bird.

Blueberries meditates on having a home under capitalism, being at home in your body, desiring women, desiring men, making money, moving cities, turning thirty. There is a strong narrative drive and a familiar authorial voice, sometimes interrupted by the same authorial voice speaking from some distance, removed through space and time. This is particularly striking in an essay which appears to be a reprint of a zine Savage made some years prior, which is accompanied by a reflection on the impact of that zine, the making of the zine, and reflecting on what she may have intended when she first wrote it. The essay loops around on itself – it beholds itself – but the circle is never fully closed, the work is alive. Savage’s essays are often self-aware of their function as art which has a monetary value, and highlight working conditions of writers, for example in the essay “Portrait of the Writer as Worker (after Dieter Lesage)” where Savage writes, “You are an investor. You are building a diverse portfolio”.

Reading Blueberries I had the sense of encountering something I had never seen written down before, being invited to spend time with a stranger who is generous with their thoughts and experiences. Blueberries has it all: politics, sex, anger, love, hope, friendship, despair, and joy, and it is carried by generosity, wit and rhythm.

Make sure not to miss Ellena Savage's virtual visit to Lighthouse on Feb 23rd. Book your ticket HERE.