'Watch, Read, Think, Act' is a collaboration between Lighthouse and the stellar team at Take One Action, the UK’s leading global change film festival.

Once a week, starting on Aug 23rd, one of our booksellers releases a new reading list - attached to five of the brilliant, thought-provoking films featured in this year's Take One Action program. Our hope is that, whether you read a book - and it helps you get even more out of the film in question - or a film inspires you to learn more about its themes, communities and places, ultimately these stories will empower you to instigate change alongside others, and do whatever you can do to re-shape the greatest stories around us.

For our third week, Anita has watched 'Call Me Human', directed by Kim O'Bomsawin. Here are their thoughts on the film and some books to keep exploring questions found within it:

'Call Me Human' is an incredibly beautiful movie and it was such a privilege to get to know the poet and Elder Joséphine Bacon. The movie made me think of Indigenous stories/experiences across the world, from the systematic destruction of Indigenous communities, their culture and their language to the stories of fierce Indigenous resistance, of extraordinary stories of hope, connections to the Elders and to the Land/Nature. 'Call Me Human' made me desperate to know more, so here are some of the books that helped on my journey exploring these themes and this history not just in Canada, but across North America, and to delve into parallels in Australia too.

Seeing Joséphine (and others) speaking Innu reminded me of how much of a culture is contained/embedded within a language. As beautifully described in Braiding Sweetgrass, in the Potawatomi language for example, verbs and nouns are divided between animate and inanimate. The imagery and poetry of the Innu language/words itself reminded me of beautiful, poetic words that do not exist/are not directly translatable in English, for instance puhpowee (Potawatomi, Braiding Sweetgrass) is ‘the force which causes mushrooms to push up from the earth overnight’, or the Wiradjuri murru, is described by Albert Gondiwindi (one of the main characters in The Yield, by Tara June Winch) as ‘the tracks the snakes, the goanna, the birds, and us make as we crisscross the world.’

Sadly Joséphine Bacon's poetry is not available in the UK, so we have picked collections of poetry that share some of her central concerns - language of course, translation/the untranslatable, but also place, landscape and connection.

The Perseverance by Raymond Antrobus for instance, beautifully explores, among other themes, language in his experiences as a d/Deaf person, beyond the confines of a hearing world, which chooses to exclude this language. I've included Native American voices, like Natalie Diaz and Joy Harjo, but also Jason Allen-Paisant, an England-based Jamaican poet whose debut collection Thinking With Trees is rich and gentle and philosophical.

'Call Me Human' had a warmth, joy and pain that could only be captured on film. If any of the books below speak to you, do watch the film - and if you've loved the film, I hope the books below will enable you to extend your moment with Joséphine and her people. 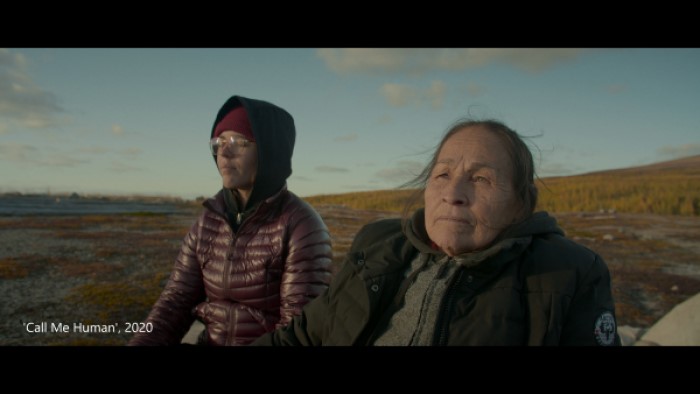 All books are available to order from Lighthouse. Tickets for 'Call Me Human' are available from Take One Action HERE, where you can read all about the film.

We're so excited to share this collaboration with you - follow the conversation online under #WatchReadThinkAct and stay tuned for the next film!

title
A Mind Spread Out On The Ground
author
Elliott, Alicia

title
All Our Relations : Indigenous trauma in the shadow of colonialism
author
Talaga, Tanya

title
As Long as Grass Grows : The Indigenous Fight for Environmental Justice from Colonization to Standing Rock
author
Gilio-Whitaker, Dina