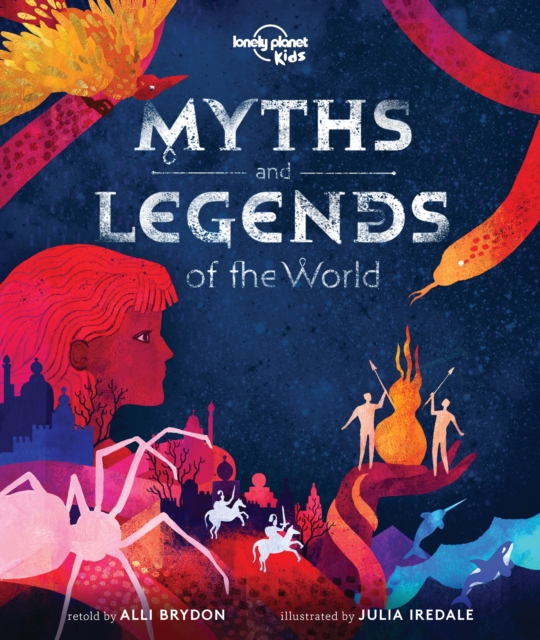 Myths and Legends of the World

Bold reader - open your mystical map and get ready to travel through time with 21 dazzling stories of daring and deceit, reward and punishment. Meet gods, goddesses and demigods, serpents, coyotes, talking fish and clever spiders, and cavort with sea nymphs, mystical women, terrifying beasts and volcano people - as you discover different tales of how the world began. These powerful, fascinating myths and legends will transport you to every corner of the globe.

You'll journey from ancient to modern times, from hot climates to freezing temperatures, from mountaintops to seafloors. The stories in this book link you to past generations; these tales have been passed down through a long line of oral traditions. The souls of ancestors, the lives of heroes and the fates of mortals are waiting to be discovered.

Myths and legends are retold by Alli Brydon and beautifully illustrated by Julia Iredale. Myths from Africa include: 'The Creation of the World' from the Kuba people of the Democratic Republic of Congo'The Tale of the Ghosts and the Flutes' from the Beba people of Cameroon'Anansi and the Box of Stories' from the Ashanti people of present-day Ghana Myths from Europe include: The Selkies from Scottish mythology'Athena, Arachne and the Duelling Looms' from Greek mythology Myths from Asia include: Lord Ganesh from the Hindu pantheon'Nyai Loro Kidul, Queen of the Sea' from Indonesian mythology Myths of Oceania include: 'The Legend of Maui' from Polynesian mythologyUluru from the Anangu people of AustraliaThe Rainbow Serpent from the Aboriginal people of Australia Myths of the Americas include: 'Coyote Steals Fire for the People' from the Native American people of the United States'The Hero Twins Visit the Underworld' from the Mayan People of MesoamericaThe Mapinguary from Brazilian mythology Myths from the Arctic include: Sedna, the Mother of the Sea from Inuit mythologyNiekija and the Northern Lights from Sami Shamanism About Lonely Planet Kids: Lonely Planet Kids - an imprint of the world's leading travel authority Lonely Planet - published its first book in 2011. Over the past 45 years, Lonely Planet has grown a dedicated global community of travellers, many of whom are now sharing a passion for exploration with their children.

Lonely Planet Kids educates and encourages young readers at home and in school to learn about the world with engaging books on culture, sociology, geography, nature, history, space and more. We want to inspire the next generation of global citizens and help kids and their parents to approach life in a way that makes every day an adventure. Come explore!