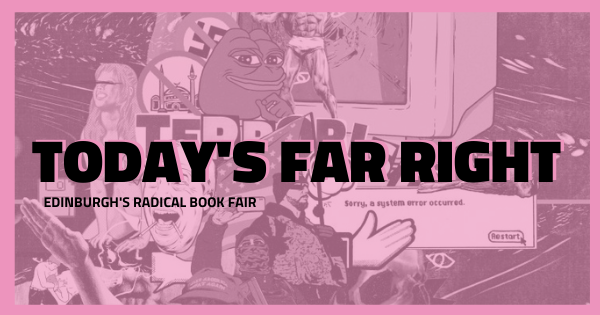 This event is a part of Edinburgh's Radical Book Fair: Futures Worth Fighting For series. Click to view more from this festival.

The far right has changed.

Since the rise of the internet, it has scattered, diversified, and stuck itself back together. The internet has facilitated these tendencies, filtering and contorting familiar forms of activity and ideology, and pushed far-right groups to adapt, causing the decline of some formations and the break-up of others. But the far right has not gone away – far from it – it is more powerful now than it has been for a generation. It has produced new configurations of tactics, priorities, and goals.

Those who have survived the arrival of the internet have found a greater capacity to exert power than at any point since the Second World War.

The far right is in a state of productive diversification. It has yet to cohere around a new stable formulation; however, it almost certainly will, and we must be ready for it.

To explore this new and evolving threat we're collaborating with the writers behind Dog Section Press' terrific new title Post Internet Far Right. for a panel discussion of today's threat from the far right - and how extremists infiltrated and shifted what was once 'the centre'.

Want Some Studio is award winning illustrator Marco Bevilacqua. Marco creates detailed hand drawn pencil illustrations that incorporate portraits, typography and wee icons. The work is usually created with a range of fancy pens and pencils, some £1.00 felt tip pens from Lidl and a wee bit of digital from his studio in Edinburgh, Scotland. It is his artwork that is overlayed with pink for this event's banner image.