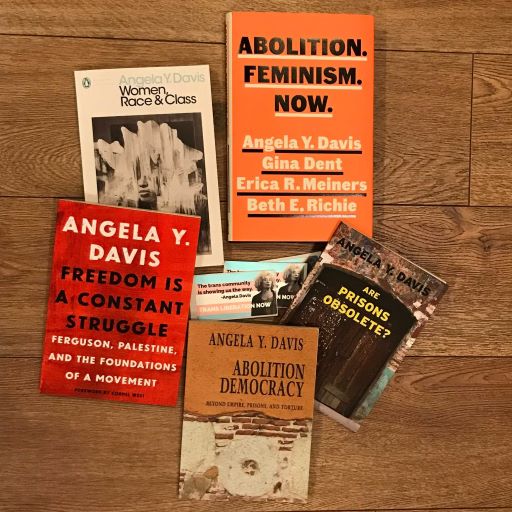 “You have to act as if it were possible to radically transform the world. And you have to do it all the time.” ― Angela Davis

Davis is one of the most influential thinkers of the last century and she is STILL today (re)shaping discourse, powering movements and uplifting new thinkers, may she be honoured and celebrated as she deserves.

We often return to her words in our work - for inspiration, for provocation, for hope, for a reminder of why we keep 'radical' in our bookshop's name.

Her wisdom is so much richer than quotes and clickbait, so dive in and read her, really. Here are some teasers:

“It is in collectivities that we find reservoirs of hope and optimism.” ― Angela Y. Davis, Freedom Is a Constant Struggle

“The prison has become a black hole into which the detritus of contemporary capitalism is deposited. Mass imprisonment generates profits as it devours social wealth, and thus it tends to reproduce the very conditions that lead people to prison" ― Angela Y. Davis, Are Prisons Obsolete?

“How can we produce a sense of belonging to communities in struggle that is not evaporated by the onslaught of our everyday routines? How do we build movements capable of generating the power to compel governments and corporations to curtail their violence?” ― Angela Y. Davis, Abolition Democracy

“The roots of sexism and homophobia are found in the same economic and political institutions that serve as the foundation of racism in this country and, more often than not, the same extremist circles that inflict violence on people of color are responsible for the eruptions of violence inspired by sexist and homophobic biases. Our political activism must clearly manifest our understanding of these connections.” ― Angela Y. Davis, Women, Culture, and Politics

title
Freedom Is A Constant Struggle : Ferguson, Palestine, and the Foundations of a Movement
author
Davis, Angela

title
If They Come in the Morning
author
Davis, Angela