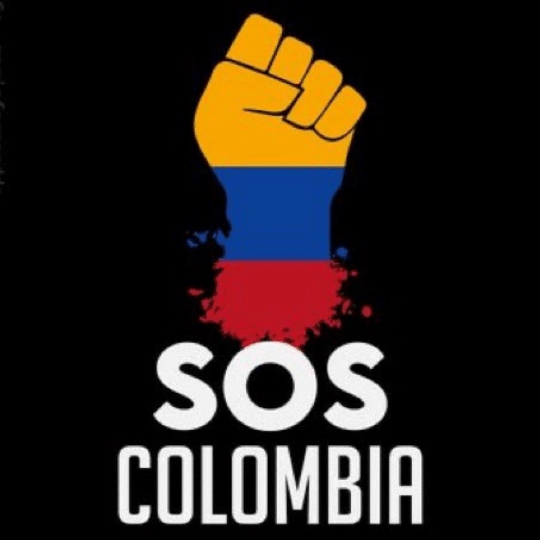 As I write these words in my home in Scotland, friends are sharing videos of the sounds of drones and fighter jets over Gaza, and of gunshots and helicopters in Colombia. In my local wildlife group, neighbors are hearing the first swift or cuckoo of the year. It matters to hear all of it. It matters to notice how unevenly heard it all is.

I was born and raised in Greece, have worked in Colombia as a peacebuilding practitioner and academic researcher since 2010, and moved to Scotland in 2018. Like many in the Lighthouse Bookshop community, my heart yearns for and breaks for many homes—and like many in this community, I am moved to pay attention to, support, and practice solidarity with struggles for freedom, peace, and justice around the world.

This post summarizes some key developments in Colombia and shares some resources for further reading and engagement.

Some brief background on the Colombian armed conflict and peace process

As of April 2021, the Colombian state officially recognizes over 9 million citizens—roughly one in five Colombians—as victims of the armed conflict that has lasted several decades. The conflict has involved state armed forces, guerrillas, paramilitaries, and criminal bands, all of whom perpetrated a range of harms, including large-scale forced displacement, enforced disappearances, gender-based violence, and others.

In 2016, the government of Colombia and the Revolutionary Armed Forces of Colombia (FARC) signed a peace agreement that marked the formal end of one dimension of an armed conflict that has lasted several decades.

It matters to describe this as a formal end of the conflict, rather than assuming the peace accord ended all violence. Many forms of violence continue to this day, particularly targeting human rights defenders and former combatants in the process of transitioning out of armed groups.

It also matters to acknowledge the peace accord sought to end one dimension of the armed conflict because several armed groups remain active in Colombia. Social inequalities and forms of structural and systemic violence also persist, even if peacebuilders, scholars, and journalists do not always formally classify these as part of the armed conflict itself.

The protesters in Colombia today acknowledge all these oppressions and inequalities as interlinked.

What is happening now in Colombia?

In April 2021, Colombian trade unions called for a national strike against a tax reform proposal that would have increased taxes on low-income groups and affected the price of key household items, including food. After four days of nationwide protests, with the city of Cali as the epicenter of mobilization, Colombian President Iván Duque withdrew the proposal.

Protesters are resisting interlinked oppressions and bring together a variety of struggles under the same umbrella. Students, workers, Indigenous groups, and social leaders are protesting the government’s response to the COVID-19 pandemic, police brutality, corruption, the murder of social leaders, the lack of fulfillment of the promises of the peace accord, and ongoing poverty, among other issues.

Watchdog groups within and outside Colombia are raising the alarm about the violent response of the Colombian state.

The state deployed the military and heavily armed riot police in the streets, who used tear gas and rubber bullets, among other violent tactics, against protesters. As of May 10, 2021, the Colombian NGO Temblores reported over 1,956 instances of police violence against protesters, including 40 confirmed killings. As of the same day, 548 people have been reported missing, with human rights defenders raising concerns about forced disappearances.

What you can do

Language politics matter for solidarity struggles. Many of the key social media posts and publications are in Spanish, as they are written by and for Colombians, often while developments are still unfolding. This post highlights resources that also address English- speaking audiences, from literature in translation to social media accounts that share content in English. This is both necessary, given our location in Scotland, and necessarily limited, in that it is steeped in the English-language dominance many of us seek to dismantle when we read, write, and practice solidarity.

Following a few key hashtags on social media can be helpful for understanding how protesters articulate their experiences and is essential for amplifying their voices. These include:

Many organizations in Colombia, as well as their allies internationally, are tweeting in both Spanish and English, highlighting solidarity actions for a range of audiences. Here is a non-exhaustive starting point:

2. Read – not only about violence and suffering, but also about thriving and joy

In times of struggle, it is tempting, perhaps, to direct our attention to inequalities and harms. Yet, inspired by Eve Tuck, it is essential to resist a “damage-centered” approach to reading. In this moment, this means turning to Colombian authors with a receptiveness for stories that go beyond the scope of the armed conflict. Violence in its many forms, from the effects of the armed conflict to poverty and from state repression to migration, is a key theme in the books below. Alongside it, though, the authors make room for the practices of care, love, and joy that enable people to survive, thrive, and build lives against a backdrop of persistent inequalities.

A few favorite books by Colombian authors available in English are below.

3. Amplify the protesters’ creativity and humor in resisting oppressions

Colombian protesters have brought music, dance, and other forms of art to the streets, recognizing that these are essential ingredients for any struggle against oppression. A few key moments:

Video description: Musicians brought their instruments to a protest at the Parque Nacional.

Video description: An orchestra joined protesters in Medellín and led anti-corruption chants. Learning from and amplifying these efforts is importance for acknowledging the ingredients that fuel sociopolitical struggles for freedom, justice, and equality.

At the time of writing, several initiatives are drafting sample language for writing to MPs in the UK, which should be available shortly through the hashtags linked above.

You may also borrow and modify language from similar initiatives in the United States and Canada.