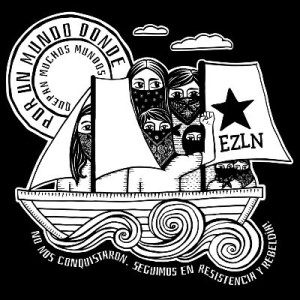 This is a guest article written by Zapatista Scotland, the local Scottish group working in support of The Journey for Life.

In May 2021, seven Indigenous Mayan Zapatistas set off on a sailing boat across the Atlantic on an 'invasion' of Europe to mark 500 years since colonisation. During this journey, which will encompass five continents, the member of the group plan to meet in dialogue and exchange of ideas with all who are committed, from different perspectives and fronts, to dismantling capitalism, as well as patriarchy, racism, imperialism, colonialism, and other violent systems that destroy life.

Here, Scotland Zapatista share their vision for the visit to Scotland, and what it means for wider connections based on solidarity. This article was first published in Spanish on the website Camino al andar.

Alba, as you all know, means Scotland in Gaelic, but it also means the first light in the morning in Spanish.

The seeds that the Zapatistas sowed since their public irruption in 1994 spread throughout the world and have been germinating over the years. As in every corner of Europe, the struggle of the Mexican peoples promoted solidarity networks in the misnamed “United Kingdom”. Particularly in Scotland, the admiration for the Zapatista communities’ philosophy and forms of organisation inspired various groups that refused —and continue to refuse— to live under a model of society based on exploitation and dispossession.

After the announcement of the command of the Zapatista Army of National Liberation about a trip to 'invade' Europe and meet the resistances in this area of ​​the planet, compas who live in neighbouring England and who share anti-capitalist values ​​launched a call for articulation. In Scotland, we soon formed a group that we called Scotland Zapatista, which is currently one of the regional coordinators to receive the Journey for Life. The collective includes activists and groups that focus on various fields of social struggle — there are those who use the arts against authoritarianism, those who support migrants, those who fight patriarchy and racism in their daily lives, those who aid disempowered individuals through the creation of communal spaces including just dining rooms, those who seek to revolutionise conservative ideas through sexual dissidence, those who practice and promote community visions against the climate crisis, those who deconstruct academic knowledge to serve for social and decolonial movements in the world.

The context in this geography is framed by the search for autonomy and independence from the political and economic control that the English elites have imposed since the 18th century. However, those of us who collaborate in Scotland Zapatista are united by the solidarity of a common project to confront the neoliberal capitalist system that prioritises capital over life. Therefore, we work collectively with compas from Wales, Northern Ireland and England to receive our sisters and brothers from Mexico. Each region has formed a broad and plural coordination that enjoys full freedom in its organisation. From this cooperative heterogeneity, we are building a route so that, during their visit, the representation of Zapatistas can learn about the experiences of the communities of this archipelago.

Just as the virus that caused the current pandemic profoundly evidenced the need to end the capitalist model, Scotland Zapatista—and the coordinators with which we are working—seeks to make viral the resistance and solidarity networks in these lands. Through a series of events and meetings, we will promote new ways of doing politics from below and from the left. Some of the actions we have planned for the compas are historical tours to show the role of this country in the slave trade towards what we now know as Latin America and the Caribbean, as well as to show them the locations that mean stories of resistance. In addition, we will pay a visit to the island of Eigg, whose inhabitants acquired the land to promote an autonomous territory. Our events will also include music and poetry, as well as meetings with migrant communities in centres that defend their rights and with communities struggling against extractivism and its devastating impacts on their health and wellbeing. In the same way, we have planned a gathering with a group of women and non-binary people who build alternative ways to live and coexist, and from where a network in support of the struggle of women in Kurdistan began.

We want to continue to learn from the Zapatistas, and we also want to teach them from our knowledge. We want these islands to be a radically different place after this journey; we want, along with all of Europe—the first stop on this planetary and intergalactic journey—to make a reality a world where many worlds fit.

You can follow the Zapatista Journey for Life HERE, in Spanish, English and other languages, with dispatches from the different stages of the voyage, including challenges posed by Mexican authorities.

A crowdfunder, set up by the Zapatista Solidarity Network to support the UK part of the journey, still has a few days left and you can contribute HERE.

The Zapatista Solidarity Network have also hosted a fantastic webinar series in the lead-up to the visit.

To learn more about the history of the Zapatistas and how their struggle connects to all our struggles, Zapatista Scotland also helped us put together a list of books which you'll find below!

Follow @ScotlandZapat and @zapatistasolid1 for updates on this incredibly exciting, historically poignant event - full of possibilites!

title
Zapatistas : The Chiapas Revolt and What It Means For Radical Politics
author
Mihalis Mentinis

title
The Fire and the Word : A History of the Zapatista Movement
author
Gloria Munoz Ramirez