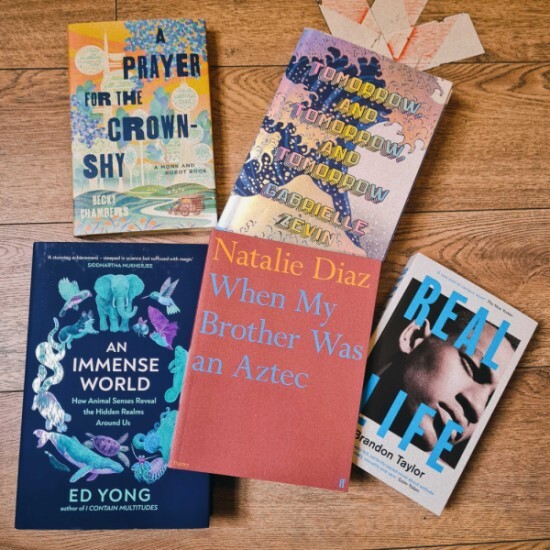 Welcome! You've reached the place where we, on a monthly basis, gather up what the Lighthouse team have been reading. You can check out round-ups from previous months amongst our Read Think Act posts.

September is bringing a mix of investigative journalism, a Becky Chambers love-fest, long-awaited poetry and more:

Record of a Spaceborn Few by Becky Chambers and An Immense World by Ed Yong.

Going Dark: The Secret Social Lives of Extremists by Julia Ebner: Super unsettling, it reads like a thriller.

I've been saving When My Brother Was an Aztec by Natalie Diaz for after the summer mayhem, during which the reading commitments made it difficult to see my own feet. Although t's only just been made available in the UK, it's Diaz's debut, first published in 2012 in the US. Intimately irreverent and exploding with love, telling stories of joy and pain in layers of intensity and humour, it's feeding a very specific stomach of mine which has been hungry for a while.

Tomorrow and Tomorrow and Tomorrow by Gabrielle Zevin: as good as everyone says it is, please read it immediately. I just finished and really enjoyed Slammed by Lola Keeley, which not only is a perfect lesbian romance but which ALSO manages the feat of getting me to care about tennis!!!! That's right I know about tennis now. And Real Life by Brandon Taylor which was incredible and heartbreaking and brilliant.

A Psalm for the Wild-Built and Prayer for the Crown-Shy by Becky Chambers. I believe Christina has previously listed at least the first, but they were a soothing, grounding read about purpose and connection. I also finished One Last Stop by Casey McQuiston. It is as joyful as I hoped, full of bi, trans, and all around queer representation. Captivating storylines and some perfectly spicy bits as well.

Babel by R.F. Kuang - rebel risings at the heart of the British empire, I was totally swept up by Kuang's Babel! Set in an alternate Oxford of the 19th Century in which language and translation enchant the silver that's feeding colonial expansion - so rich in history and imagination, loved it.

title
A Prayer for the Crown-Shy
author
Chambers, Becky

title
A Psalm for the Wild-Built
author
Chambers, Becky

title
An Immense World : How Animal Senses Reveal the Hidden Realms Around Us
author
Yong, Ed

title
Babel : Or the Necessity of Violence: an Arcane History of the Oxford Translators' Revolution
author
Kuang, R.F.

title
When My Brother Was an Aztec
author
Diaz, Natalie