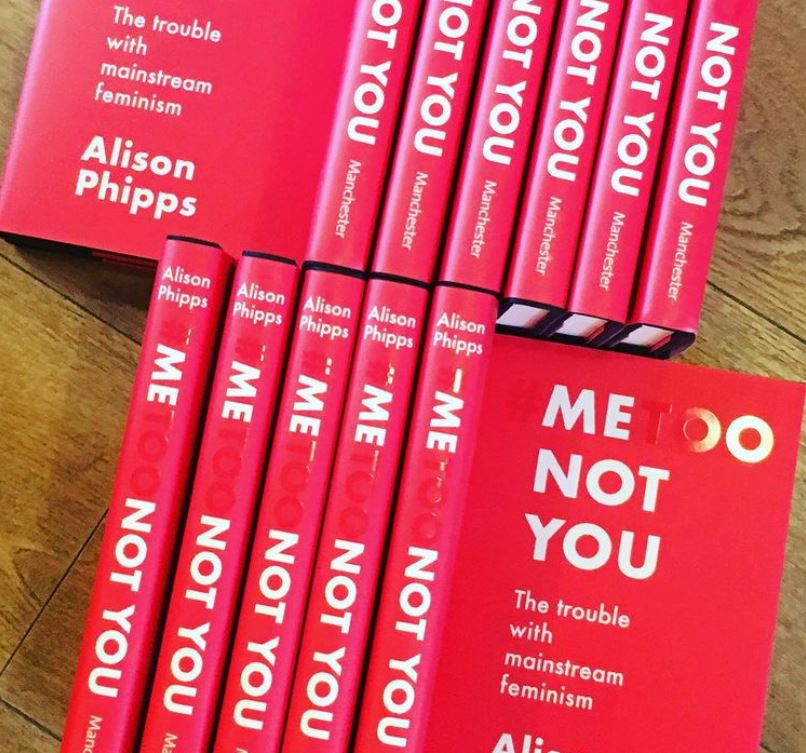 ‘This is a necessary and vital addition to feminist texts. Alison Phipps has done exactly what women of colour wish we saw more of during these days of #NotAllWhiteWomen. She has looked white feminism and political whiteness in the eyes and delivered a much-needed reckoning. It is exhausting to both fight political whiteness and explain to white women what that whiteness is, how it benefits them and why the status quo must end if we are all to be free.’ -Mona Eltahawy

As a feminist bookshop, we regularly have publishers pitching us books by women that we are “going to love”. They offer group biographies of “inspiring” women that all include & uncritically idolize the likes of Coco Chanel. They’re celebrating another history of our movement that fails to include any working class voices. They champion “Feminist” hot takes authored by transphobic activists. Their ‘Get empowered’ polemics vociferously defend capitalism. So many of their “Be all you can be” books fat shame, or white wash the labour of women of colour. There is so much crap out there born of the mass commercialisation of ‘feminism’ in the publishing industry.

This was the context that led fellow radical bookshop Five Leaves to revive the Feminist Book Fortnight that first ran in the 1980s. We became one of the bookshops to join the campaign for a chance to shout about our vision of a truly intersectional feminism concerned with social and economic justice, striking at the heart of inequality and oppression.

We keep our eyes peeled all year round for writers to programme in Feminist Book Fortnight - and this year highlights of the may line up included Lola Olufemi, Pragya Agarwal, Camila Cavalcante and Alison Phipps.

We might not be able to run Feminist Book Fortnight as a series in the physical bookshop, but we’ll be damned if we don’t still have those conversations and celebrate those books.

Alison Phipps’ new book came out this week, and that’s one good reason to celebrate. Me Not You pulls back the curtain on #MeToo and other recent feminist campaigns against sexual violence. In a right-moving world, women’s anger about sexual violence has been celebrated as a progressive force. However, mainstream feminist politics is unable to tackle the converging systems of gender, race and class which produce sexual violence.

Phipps argues that the mainstream movement against sexual violence expresses a political whiteness which both reflects its demographics and limits its revolutionary potential. Privileged white women use their traumatic experiences to create media outrage, and rely on state power and bureaucracy to purge ‘bad men’ from elite institutions with little concern for where they might appear next.

Even more dangerously, the more reactionary branches of this feminist movement are complicit with the far-right, in their attacks on society’s most vulnerable.

Alison Phipps has been a scholar-activist in the movement against sexual violence for the past fifteen years, and today we share this brief but fascinating exchange between her and Noor.

Hello! Congratulations on the new book - How are you feeling just now?

Overwhelmed! It’s a very strange thing to have a book coming out in the middle of a pandemic. Part of me feels self-indulgent to be promoting it – there are so many more important things to focus on right now. But I also see the colossal, crushing inequalities that have been exposed so starkly by Covid-19 – inequalities which are central to my book’s analysis – and I hope that what I’ve written could be of some use.Perhaps for life after this pandemic, when we may all have to decide whether to carry on as before or do things differently. So I’m doing book publicity – in between home-schooling my kids, teaching my students online, and participating in local mutual aid networks. It’s a lot to think about, but not compared to what some people are having to comprehend and deal with.

What inspired you to write Me Not You?

The book came out of my personal discomfort with mainstream feminist activism, which I had been involved in for a while around sexual violence in universities. Before #MeToo went viral, campus-based activists had also been ‘naming and shaming’ to bring perpetrators to justice. Often, this happens because it’s the only option left to survivors who have been profoundly let down. But I was nevertheless left with the question: where do these ‘bad men’ go? I knew some of them went to other universities and continued the same behaviour – that’s called the ‘pass the harasser’ problem.But I worried that the suggested solution to that – to exclude perpetrators from academia entirely – might just outsource them to lower-status sectors, where women have fewer rights and protections. And my fear that less privileged women might be collateral of campus-based feminism dovetailed with my deep unease about the criminal punishment system, which also creates collateral damage in massive, devastating ways. This was where ‘Me, Not You’ came from – it’s a play on and critique of #MeToo.

In a few short sentences, can you summarise the trouble with mainstream feminism today?

I can try! The main issue is that mainstream feminism is grounded in the experiences and concerns of bourgeois white women. This isn’t just about representation (though representation is important) - it profoundly shapes the movement’s strategies. Mainstream feminism tends to be focused on punitive redress for personal injury; this doesn’t tackle the structural causes of sexual violence and often ends up legitimating oppressive structures instead. More marginalised people are treated as collateral – we expel abusers from high-status professions and industries with little thought for where they go next, and we bolster the criminal punishment system through demands for new crimes and longer sentences.At its extremes, mainstream feminism becomes so obsessed with its own sense of victimisation that marginalised people who challenge it become its enemies (this is especially the case when it comes to sex workers and trans people).

‘Political whiteness’ is a fairly new term. Can you unpack it?

Political whiteness isn’t a term I invented – it’s been used by other people, most prominently by Daniel Martinez HoSang. I draw on his work, as well as that of Gurminder Bhambra, in my own formulation. The term has often been used to describe politics that has an explicitly or implicitly ‘whites first’ orientation – I try to deepen that, to look at the inner landscape of whiteness and how that’s politicised. For me, political whiteness has three linked elements: narcissism, alertness to threat (which in white women’s case is almost always sexualised), and a need for power and control. It tends to produce deeply defensive and punitive forms of politics, whether that’s the wounded whiteness of the anti-feminist backlash, or the desire to ‘take back control’ that gave us Brexit and Trump.In mainstream feminism, political whiteness manifests in practices of naming, shaming, excluding and punishing which have unintended harmful effects. At the thicker end of that wedge, more reactionary trans- and sex-worker exclusionary feminism polices the borders of womanhood and can be intentionally cruel.

Did you have a reader in mind when you wrote Me Not You?

I did – Me, Not You is written for fellow white women and white feminists. I’ve always said that women of colour won’t need to read the book; it won’t tell them anything they don’t already know. I hope the book will speak to white women who, like me, feel uneasy about aspects of mainstream feminism and want to do things differently. There’s been much discussion lately of ‘white feminism’, much of it useful – I hope my book will contribute a deeper understanding of why white feminism is the way it is and what we could do about it.

You’ve written Me Not You with a very clear sense of your own positionality. Do you have any advice for anyone else who wants to be able to see their own position with clarity?

I’m not sure I see my own position with full clarity – I’m not sure anyone ever does – but I don’t think have any better advice than: listen to people in more marginalised social positions than you. That doesn’t mean fetishising oppression and it certainly doesn’t mean we don’t all get things wrong sometimes, regardless of who we are. But I believe, drawing on Patricia Hill Collins, that people who are at the sharp end of multiple oppressive systems tend to see the world more clearly than people who aren’t. That’s intersectionality.

This book concerns some very difficult and interconnected topics such as sexual violence, structural racism, carceral feminism, and the lack of solidarity from white feminists towards people of colour and working class people. Do you see a way out of these intersectional oppressions?

I’m not sure I do see a way out – there certainly won’t be a way out in my lifetime – but I’m starting to grapple for ways forward. As I write in the book’s conclusion, I’ve been inspired by the work of prison abolitionists such as Mariame Kaba and especially the idea of ‘non-reformist reforms’. These are actions that move us closer to, rather than further from, the world we ultimately want and need. In the conclusion of Me, Not You I try a thought experiment – I imagine a world in which powerful groups and individuals don’t dominate others through sexual violence.We may never live in this world, but it’s important to visualise it – then we can work out if we’re moving towards it or away. As Lola Olufemi (who also has a book out at the moment) says, imagination always has been, and will continue to be, our best liberatory weapon.

How does it feel having this book out in the world?

It feels amazing! Even in all the anxiety and chaos of this pandemic, seeing the book emerge has given me joy and a small piece of my previous life to cling to. There’s also some fear – the book is unflinching and likely to provoke strong feelings in readers. Some people will hate it for the wrong reasons, and some people will hate it for the right ones. But I’m proud of what I’ve done.

And proud you should be, it’s a phenomenal book and I’m sure it will inspire & challenge new & established feminists alike. Speaking of inspirations -what writers or individuals have shaped the way you write/ what you write?

I owe a tremendous debt to feminists of colour and especially Black feminists. For providing the intellectual foundations of my understandings of sexual violence and feminism, and for inspiring me with how they write. For me, Black feminist writing is a masterclass in storytelling. Black feminist academics show constantly that you can be both complex and clear at the same time, that scholarly texts don’t need to be inaccessible or boring. Audre Lorde and Angela Davis were early role models for me; more recently I’ve been deeply affected by the work of both Saidiya Hartmann and Christina Sharpe. I could never hope to write like any of these women – I’m in awe of them all – but I try to emulate them where I can, especially in terms of communicating complex ideas with clarity.

What do you listen to when writing/have you got some favourite background music?

Prince, Prince, and more Prince! Actually I often like to write in the quiet, but when I’m in need of inspiration there’s nothing like the purple poet.

Thank you SO much for taking the time, and now, for a little reading:

title
For the Lives of All Women
author
Cavalcante, Camila

title
Me, Not You : The Trouble with Mainstream Feminism
author
Phipps, Alison