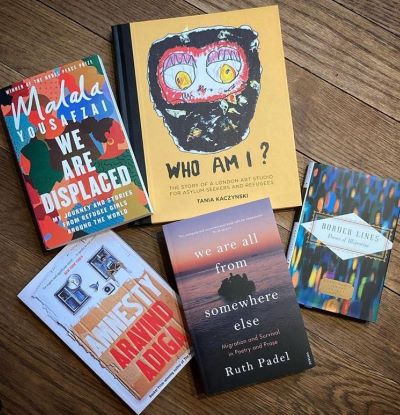 NO HUMAN IS ILLEGAL! People who are recognised as fulfilling the extremely stringent requirements of the refugee process are by definition victims of trauma and persecution.

Priti Patel's latest asylum plans will push more people into dangerous journeys. Many fleeing persecution will be totally left out of resettlement routes.

Pls follow, support & amplify the work of The Joint Council for the Welfare of Immigrants, Women for Refugee Women, Refuweegee, Chooselove Re-Act Scotland and Saheliya Scotland.

Scenes from Glasgow's Pollokshields on 13th May, as a human blockade on a dawn raid immigration detention van halted the state kidnap of two men from the local community.

or like a letter to your MP to make clear you will not stand for such measures. The Joint Coucil for the Welfare of Immigrants has this template.

or signing a petition/boosting a campaign - like these ones, by Detention Action to end indefinite detention and Scottish Refugee Council to end immigration detention.

or a donation to the groups above, or to a direct action group like no_evictions network , who are raising money for essential top up phones for migrants HERE.

or getting involved with/supporrting groups like These Walls Must Fall in England,

title
We Are All From Somewhere Else : Migration and Survival in Poetry and Prose
author
Padel, Ruth

title
We Are Displaced : My Journey and Stories from Refugee Girls Around the World - From Nobel Peace Prize Winner Malala Yousafzai
author
Yousafzai, Malala

title
A Country to Call Home: An anthology on the experiences of young refugees and asylum seekers
author
Popescu, Lucy

title
Tell Me How it Ends : An Essay in Forty Questions
author
Luiselli, Valeria