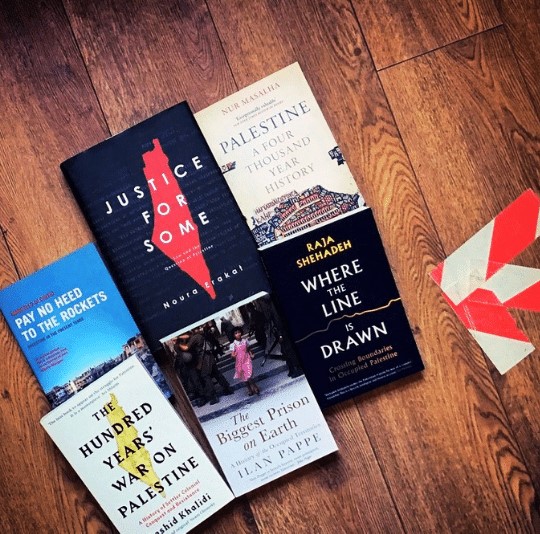 Our hearts are breaking.

The news coming out of Colombia, of Myanmar, of India, and now Palestine is brutal. We know it feels like a lot - and that's because it IS a lot. Being committed to intersectional feminism and human rights, means making space for this, standing in solidarity, however you can.

[This post was originally created May 11th. Since then the Israeli government has begun an all out assault on Gaza resulting in over 110 deaths, including 31 children. Over 600 wounded, homes demolished. The situation is unfolding, do not look away]

The proposed evictions of families from Sheikh Jarrah is only the most recent and widely known instance of decades of the same injustice faced by Palestinians. If they are forced out of their homes, they will be replaced by right-wing Israeli settlers who filed the claim against them. The word 'eviction' however, fails to convey both the historical and contemporary actions taken against these families, as explained by Mohammed El Kurd here:

Sheikh Jarrah is a neighborhood of occupied Jerusalem, and the families who are being forced out were already refugees, having found a home there in 1948 after the Nakba, when about 750,000 Palestinians were forced from their homes, and an estimated 15,000 Palestinians were killed. The Israeli Supreme Court has delayed its ruling on the eviction of the families, but this is in large part due to the huge demonstrations of solidarity by fellow Palestinians who have protested the evictions and spread the word worldwide. Sheikh Jarrah is not the only focus point.

Human Rights Watch has officially called the situation in occupied Palestine Apartheid. Palestinians of all religions and creeds face persecution on a daily basis just for existing, whether that is in Jerusalem, the West Bank or Gaza.

The Israeli armed forces and settlers have also stormed through Jerusalem attacking Palestinians, including in the al-Aqsa Mosque while Palestinians were praying. They fired rubber bullets, tear gas and sound bombs, and prevented the Red Crescent from entering to aid the civilians they attacked. The Red Crescent reported that 180 Palestinians were injured and 80 needed hospital treatment.

Just last week, the Israeli armed forces killed 3 people, including 16-year old Said Odeh who was shot twice in the back near Nablus in the West Bank. Israeli settlers, protected by Israeli soldiers, have recently taken to the streets in Jerusalem chanting “Death to Arabs”, which led to 105 Palestinians being wounded, and 50 being arrested.

On 13 April 2021, the call to prayer from the al-Aqsa mosque at the beginning of Ramadan was prevented by the Israeli armed forces, who cut the speaker wires. As antagonism by Israeli armed forces, settlers, and the Israeli government increase, we will see more yet more Palestinians facing the brunt of their aggression. Right this moment, Palestinians, and the families of Sheikh Jarrah in particular, need your help.

What can you do?

~We have a handful of books flagged below, and you'll also find free resources & information here:

In June Scotland's terrific Dardishi Festival is putting on the event Palestine Is A Feminist Issue - book a spot HERE.

~ Social media is HUGELY important in sharing what happens in Palestine because media outlets do not accurately report the situation. The court's decision on Sheikh Jarrah evictions has already been delayed because of popular outcry - we must keep the pressure up.

Individuals you may want to check out include:

~You can also ask your MP to specifically call out attacks on the Al Aqsa Mosque using this template: HERE

Lobby the institutions you work or study in (added thanks to info from Alex at Edinburgh Uni, and Sofia Akel)

~Find out if your institution is complicit in Israeli oppression of Palestians through this database: https://www.palestinecampaign.org/university-complicity-database/

~Adele Walton prepared this template letter to send your uni in response: https://docs.google.com/document/d/1rxujeSt4YYlEvMWhZFAUD6swIZy_v-xzOM0DInuon8g/edit

As you raise awareness of atrocities in Palestine and Isreal it is vital not to conflate the Israeli state and settler colonialism with Judaism. Be mindful of the content you share - it is not acceptable to fight one oppression with another and antisemitism is never acceptable.

More people are being hurt, killed or silenced in this conflict every day and Palestinians need you to stay tuned, to keep caring and sharing today, tomorrow, next week, next month, until the occupation is over.

title
Justice for Some : Law and the Question of Palestine
author
Erakat, Noura

title
The Biggest Prison on Earth : A History of the Occupied Territories
author
Pappe, Ilan

title
A Half Century of Occupation : Israel, Palestine, and the World's Most Intractable Conflict
author
Shafir, Gershon

title
The Drone Eats with Me : Diaries from a City Under Fire
author
Abu Saif, Atef

title
Pay No Heed to the Rockets : Palestine in the Present Tense
author
Di Cintio, Marcello

title
Writings on the Wall : Palestinians tell in their own words of life under Israeli apartheid
author
Suarez, Thomas

title
A Map of Absence : An Anthology of Palestinian Writing on the Nakba
author
Alshaer, Atef